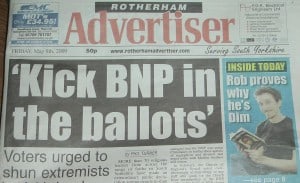 The Rotherham Advertiser saw fit to put me on their front page last week after I stepped out of the audience and onto the stage with the Open Minds Theatre Company, for their production of A Clockwork Orange.

The actor playing five roles in the play sustained a debilitating hamstring injury that was to cause the cancellation of the show on the first night of the production, devastating all involved after they received their strongest review to date. Having been watching the show, and impressed by their professionalism and quality, I volunteered to take on the roles of Dim, Warder and Big Jew in the play.

With sixteen hours to learn the lines, four fight scenes and a song and dance number, I worked intensively with the director, choreographer and lead actor to craft a performance that would ensure the show goes on, exhausting myself in preparation for the intensely physical part I was to play. 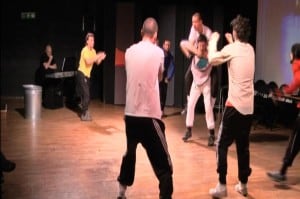 After the performance I received positive feedback from all sides, from business partners in the theatre to members of the public. I took on the role for the two week run, and was happily accepted as a member of OMTC for my contribution.

The experience was a great vindication for me and my eventual career aspirations, and I thank Open Minds Theatre Company and The Rotherham Advertiser for bringing this story to life.