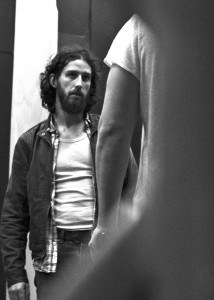 Macbeth is a supernatural political thriller, full of intrigue, brimming with bloody murders and underpinned by the kind of human drama that still fuels much of the best film and TV today. The name of the play is full of superstition within the theatre- some claim this is because of misfortune following those who name it, but I prefer the story that it was used by repertory companies when sales were falling short, as it would guarantee audiences, so playing Macbeth meant the business was in strife. No danger of that for the Merely Players.

Merely: Macbeth saw artistic director Scott Ellis take the title role and Creative Associate Simon Grujich debut as a director. For my part, I was to be the ill-fated lord with a legacy, Banquo.

Banquo begins the play as an equal to Macbeth and is confronted with prophecies from the wyrd sisters, when their paths begin to diverge. Banquo’s life ends violently in securing the survival of his son and thus, a line of kings that led to King James I, who would have sat in the audience when the play was first performed. His legacy is not just material however, but ethereal too, serving to publicly unseat Macbeth, setting up his downfall.

The play also gave me an opportunity to fight arrange perhaps the most profound of all of Shakespeare’s epic battles. Macbeth vs Macduff (a part played by the physically daunting David Gerits), shows that Shakespeare understood what made a superb fight scene as much as he understood every other element of theatre.

The fight begins with Macbeth contemplating suicide, only to undertake an erratic reversal of energy and put his sword to work on every man alive. No sooner is it clear that he must be stopped than Macduff arrives to avenge his family, put to death by Macbeth’s assassins. Macbeth begins the fight with supreme confidence, fuelled by a sense of invulnerability. He then shatters like glass as Macduff reveals the last and greatest twist in the tale, only to explode once more and die in an emphatic catharsis for not just Macduff, but himself.

The script had been stripped down to its essentials, and the pace and energy of the performances, together with a careful edit, saw the play take only an hour and forty minutes. Perfectly pitched, it matched cinema-going attention spans and allowed people to fit it into their Easter holiday schedules without too much trouble.