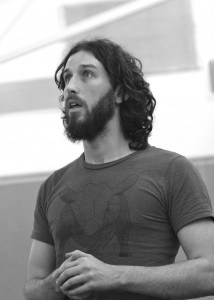 Expectations were set almost impossibly high by the first Merely Players’ show, Comedy of Errors. While rehearsing the show, we had simultaneously been learning our lines for Romeo & Juliet. I was to play Friar Laurence, a part I had never anticipated I would be cast in, but that gave me excellent opportunities to develop the character in a way that would make sense of my casting.

Friar Laurence thus became a kind of older brother to Romeo, and one who had made the kind of mistakes that only taking refuge in a monastery could solve. As such, he knows first-hand how brutal the outside world is, and may well have a personal motivation to end the ongoing family blood-feud: if all is forgiven, perhaps he can be too. 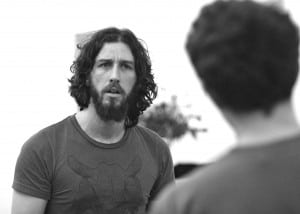 At the same time, the company rightfully insists that all character choices be motivated from within the text, and that they exist only to serve the text and tell the story, which saves the productions from any risk of self-indulgence. Simon Grujich and Sophia Alexandra took on the eponymous roles, with Hannah Wright as the firebrand Mercutio.

As well as my own performance, this was the first show in which I was to take on the responsibility of fight arranging. A keen stage fighter, it was a pleasure to work on classic scenes between Tybalt and Benvolio, Mercutio and Tybalt, Romeo and Tybalt and Romeo and Paris. It was the first time I realized quite how much violence there was in the play, and I was keen to ensure each character had a definite style and approach to fighting- again, as supported by the text.

The production itself was sold out after the first show of the season saw word of mouth spread, and the energy and adrenaline served to keep me on the crest of a wave throughout the performance. Audiences were surprised by the amount of comedy in a production that can often be leaden down with gravitas, and the fast pace and unique style of the Merely Players allowed for light and shade to be played with equal force. Friar Laurence ended up being one of my favourite roles to date, and after my madcap cameo as Pinch, really helped me to feel like one of the Merely Players in earnest.