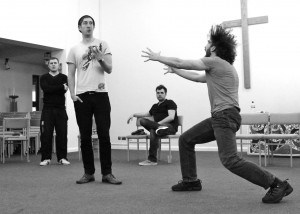 Opening night for the launch of a project as ambitious as this one can make or break the concept itself. Our mission is a bold one: to perform a Shakespeare play every month for one night only with only eight rehearsals.

Thankfully, opening night saw over two hundred audience members pack out the Cockpit Theatre in Marylebone, eager to see what all the fuss was about. Thankfully, the show did not disappoint.

Principal cast members Stephen Leask, Patrick Warner, David Frias and Merely Players’ Creative Associate Simon Grujich performed as the Antipholi and Dromii of Syracuse and Ephesus respectively and blew audiences away with explosively energetic performances that saw the audience rattle the rafters with fits of laughter. For my part, the laughs began with a simple glazed look, and cut into my first line. 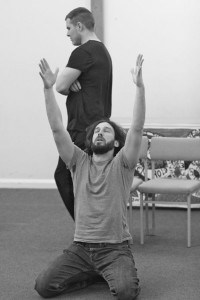 Patrick extracted many more through his deadpan dismay as I frantically attempted to exorcise a demon from him, and the flash in the pan was imprinted upon many memories if the after show bar was to be believed. The audience demanded a second curtain call, and many bought their tickets for the next show there and then. My responsibilities would be much greater in the next show, taking on the part of Friar Laurence.